I do enjoy to cook. Sadly it is not something I do very often but when I get the opportunity I try to indulge in making a hearty meal! Having been to Austria and the Czech Republic recently I have rather fallen in love with Goulash. This very fulfilling stew is a great way to refuel at the end of a long hard day. When I saw someone recommend adding beer to the sauce I decide that it was about time I rolled up my sleeves and got stewing!
I started by adding some olive oil to a pan and then slicing an onion into rings and adding this to the pan on a medium heat. After the onions went translucent I added three whole garlic bulbs I had crushed and the stewing steak. I had seasoned the steak before I put it in the pan and also coated it in plain flour. I then turned up the heat to brown the meat. Once this was done I added the spices. I added a very liberal dose of Paprika, the key to goulash, and I also added a teaspoon of chilli powder. This is not usually done, but I like a bit of heat in my food!
After this I added a can of chopped tomatoes and, most importantly, half a bottle of Paulaner Oktoberfest. The addition of beer allows the sauce to thicken and gives the stew a real richness of flavour! Any good pilsners or lagers are recommended for the sauce. Once these are added bring the sauce to the boil and add my secret ingredient, which is marmite. Some recommend beef stock but I think the use of marmite gives the same salty flavour but does not dilute the sauce to much.
Once this is done, turn the heat down low and leave to simmer for at least an hour and a half. In the final half an hour slice a red pepper in thin strips and add to the Goulash.After this your goulash will be complete! All that is left for your to do is decide on a side. I had mine with crusty bread, almost serving it like a hearty soup. However potatoes, rice, dumplings or Austrian noodles all work well. I also served with some sour cream which balanced the heat of the goulash wonderfully. Good luck cooking and remember the best thing about slow cooking is that you can experiment as you go along, so feel free to depart from my recipe if you feel that is best! 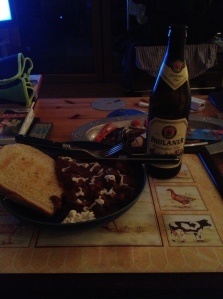 Ingredients:
500g Stewing Steak
1 whole onion
3 bulbs of garlic
Olive Oil
3 tea spoons(season to taste)Paprika
1 tea spoon Chilli Powder
1 Can of chopped tomatoes
1 tablespoon of marmite
Half a bottle of good lager/pilsner (add as much you want, but try not to drown the meat. Think, less for goulash more for chef)
Salt
Pepper
1 Red Pepper