For some time we have been quick to criticise the supermarkets. Whether it is for poor wine or beer selection or for just generally being an unpleasant place to be.  However the former is now no longer the case. Whilst we would not go so far to say that they have the most exhaustive collection of beers, they have put together a more than reasonable selection of brews in recent years. Whilst we cannot speak for all of the supermarkets, Morrisons, Tesco and Waitrose all contain an interesting range of beers.

Morrisons probably has the poorest selection of the three however they have made an effort to be improve their selection of ales. On our last visit we were very impressed to see some Harviestoun Bitter and Twisted on the shelves. What we must also commend them on is the production of brief tasting notes for quite a lot of their bitters. This is something Tesco also does and if beer is going to grow and people are going to take a chance on new beers this is essential. It gives everyone the opportunity to gain an idea of what it is they are tasting for the first time. As we know all to well, providing information on your product is the key to sales!

Tesco and Waitrose though really do stand out for us. They have a good selection of bitters, with an increasing focus on local beer, for example Mike’s nearest Tesco stocks Arundel beers as well as Hogsback (which to his great cheer appear to be going national in its popularity).

However it is the growth of more international craft beers that stands out at the moment. We would be disappointed if we walked into a large supermarket where there was no Sierra Nevada or Sam Adams. On top of this beers such as Goose Island IPA, Paulaner, Duvel and Brooklyn Lager are considered essentials and are given pride of place in Tesco beer isles. And Phill still considers it a treat to find Sierra Nevada Torpedo in a supermarket near him. The massed ranks of lagers are becoming very much hidden!

To finish we want to add that it was this picture that inspired us to write this article. we were delighted to see the return of Chimay to Tesco. It had previously stocked Chimay Red however this was removed, and now after a two year absence Chimay Blue has taken its place.  This is a serious beer and the symbol of it being flanked by Duvel on one side and Franziskaner on the other really shows the jump forward the supermarkets have made in the quality of their beer aisles! 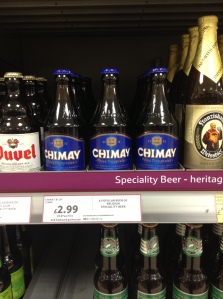 Triple Karmeleit (Waitrose); I am delighted that Waitrose stock this beer. It is expensive but it is a perfect Belgian triple. A wonderful golden colour is matched by intense stone fruit and slight honey influences. Brilliant!

Goose Island Urban Wheat (Tesco); This is a really pleasing addition to Tesco’s range. A cross between a wheat beer and a pale ale. This combines the wonderful refreshing nature of wheat beer with the body and bitterness of an ale. An excellent aperitif.

Samuel Adams (Morrisson’s & others); Shepherd Neame are about to start to brew this under license so it is your last chance to buy it imported from USA. It is a great starter for people new to craft beer, it’s a lager so won’t scare many people but the flavour will still really stick with you.

Jaipur (Waitrose); This is quite possibly one of  my all favourite time beers, I was almost as excited to discover it in the supermarket as to when it arrived at my local Wetherspoons. It’s an IPA which is packed with citrus and slight caramel, I can’t wait to enjoy the BBQ season with this beer.

Let us know what hidden treasure’s you’ve discovered in your local supermarket.